The first word revealed to Prophet Muhammad (peace be upon him) was Iqra – meaning “Read!”

“Read! In the name of your Lord, Who Has Created; Has Created man from clot. Read! and your Lord is Most Generous. Who taught by the pen. Who has taught man that which he knew not”

Throughout history, the value of education has been universally well-recognized as a fundamental human right. Education not only opens doors of opportunity to a better living standard, it also broadens our views about world affairs and social norms around the world, helping us become more tolerant and law-abiding citizens. Illiteracy is not caused by a lack of intelligence; rather it is often a result of outside factors that can be addressed. Today, a large segment of the world’s population – particularly in Muslim countries – does not know how to read or write. As a result, they are unable to achieve their goals in life and reach their full potential in terms of financial stability to support their families.

The dark blue shaded countries in this map represent 50% or higher illiteracy rates; unfortunately many of these countries are Muslim dominated regions; Pakistan has one of the highest illiteracy rates. Illiteracy is their plight and Hidaya’s foremost challenge. Hidaya Foundation strives to focus on Educational programs as its highest priority since we strongly believe that most social ills are a direct result of lack of education. 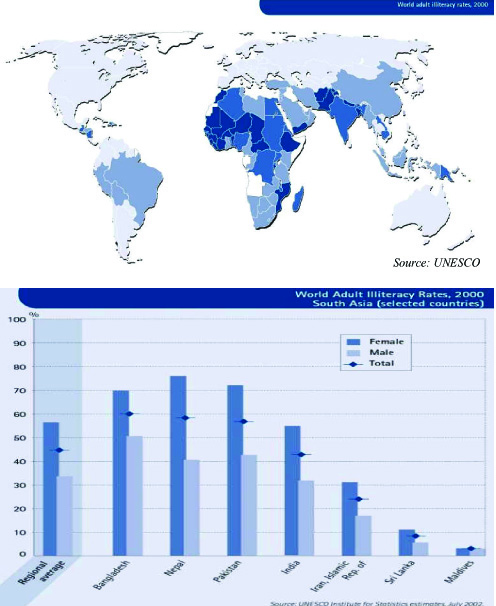 Hidaya Foundation plans to spend at least 50% of the donated funds towards educational programs.